Some Bits to Remember About Synology Standard Operating Procedures 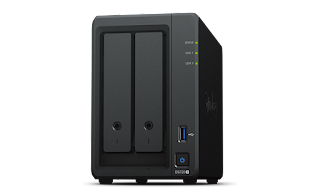 Since running the Synology at home for a while now, there's a few things that I wanted to note which aren't really intuitive and I don't do often enough to remember.
Encrypted folders are setup in a couple ways which I touched on in Home NAS Encryption
One uses a key file stored on a removable USB drive. I have it setup to mount automatically so that's okay... But I used a really old USB key because obviously I didn't need an 32GB key to store a 32KB file but it's flaky so sometimes the USB key isn't available and it doesn't mount until I wiggle the key and re-mount.
Second uses a passphrase so there's no way to mount automatically and whenever I reboot like after a DSM update I have to go back in. 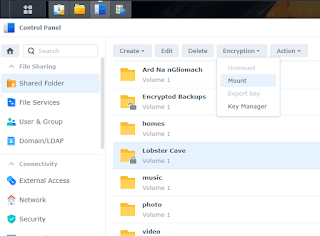 To mount the encrypted share manually, whatever the case it isn't mounted automatically, it is found in control panel.
The other part of the S.O.P. is updating the DSM and package software, i.e. the most common cause for reboot :) It's all been really smooth so I try to do it all the time.
DSM 7.0 was released a little while ago and I left the major version upgrade just so that I wasn't among the earliest adopters. Ran the upgrade today and it was seamless so far and Synology provided some clear prompts on cleanup items like removing obsolete packages (like Python now part of DSM).
Ciao!
Dom617b
Posted by Dominic at 11:06 No comments: