At least if I've setup all the new names, redirects, and certificates. Otherwise, you're not seeing this for which I have only myself to blame. The process I think could have been simple and I'll add a few notes about where Google is tying in services.

Its long past time to move on from the online handle I was using in high school so here I am Dom617b! The 617b is what I use when I can't get my own name or handle when registering for some site so that ties in to the old part, plus "617" kinda looks like "bit" in 1337 and "b" for binary, so it all comes together as a Nibble handle.

The Synology DSM supports creating encrypted file shares and I want to use this for backups as these can contain personal files. Initial setup seems pretty flexible as you can create a share with encryption or enable encryption on an existing share and you can use key files or pass phrases and there's a feature called a Key Manager with good documentation for DSM for all of these.

My setup is to use a removable device as a key store.

Then start creating shared folders that use encryption and you can pick the key manager. This also lets you pick if you want encrypted folders to be enabled automatically on boot which would require leaving your external key manager device connected.

After that, you need to keep copies of your key store and keys somewhere safe in case you lose key store device.

Following actually picking and buying a NAS in Home NAS Part 1 the initial setup of the Synology is of course very easy. If you don't get distracted by all the buttons and spend days and days with "what's it do? what's this do? what's this do?"

First of all I should have gotten one of these 2 bay NAS *ages* ago and even the cheapest model would be fine. So I'll start with the list of things that are overkill in my setup.
This is to say this NAS is a miniature powerhouse relative to its task and purpose. I setup a couple initial shares, a couple accounts, and transferred all my files over.
Right away file share was far more stable than either the USB drive I'd tried attached to the ASUS router and far more reasonable than running a full sized desktop to be running all the time. Also really so much better to consolidate storage from many places.
The DS Finder app on mobile is used during initial setup and for general admin. Its been great so far, which I kind of expect for modern devices (like ASUS routers). One tidbit is that during setup you setup an account and the first account is a general admin which I went back in later to add a separated admin user and demoted my own "normal" account.
One awesome app on the Synology is Cloud Sync basically to pull down files from OneDrive and Google drive, and any number of accounts which gives me a real backup of all that data.
The photos stuff I'm not 100% keen on as it looks like Synology has been trying different things over the years and that's the one thing that's really long term retention so not too confident there yet. It's not like the files go away so I am trying the Moments app which is scooping pictures from my phone and uploading them to the NAS. I went through the Google Takeout process to harvest all my photos that are up there and copy them to the NAS, plus the computer, plus the laptop, etc.
That's about as far as I've gotten so once I do start setting more up on there whether external access like to get files from mobile device while remote or Plex Server and dumping more multimedia on there, all kinds of cool stuff on there eventually.
Ciao
Posted by Dominic at 10:55 1 comment:

After many years of wanting and putting off getting a dedicated Network Attached Storage, I have finally ordered a Synology DS720+. Literally just ordered it and it's not here yet, so this will briefly by about the "why".
Cloud storage is great including Google Photos to hoover up pictures and Microsoft OneDrive for shared files especially MS Office documents. Definitely the best if the free or paid tiers work for you but for me it was going to be too costly. I've been trying other ways like running a file share on an old computer but its too loud and takes too much space or hooking up a USB drive to my Asus RT-AC86U but it's SMB1 and acts weird. So a NAS - a dedicated device that will be compact, quiet, power efficient, feature rich and upgrade-able.
Synology, QNAP, and others make a plethora of products and I rely on Dong Knows Tech and also on write-ups like this one on the whole current Synology + series on NAS Compares. I've used both Synology and Qnap at #dayjob and Synology I think is more for tinkerers and I do like to poke things with sticks..
How big a NAS? It really came down to that I know I will want to upgrade the hard drives in the future so I want the fewest possible and that I can get the capacity I want on a 2 bay unit.
And then the model comparison - if you go on Synology's site and look at their products even limiting to 2-bay models only they have 8 current products. What the great mother of Fridays? It came down to that I will heavily use a NAS and the price differences were relatively small to go right to the DS720+.
Alternatively, for something for backups and basic file sharing, people frequently sell their old NAS on Craigslist / FB Market. I wouldn't buy drives secondhand, they're the only components that routinely fail and every year someone else used them is a year less life they have. Otherwise, yeah buying a NAS second-hand would be great get a couple new drives, awesome.
Time to go check my shipment status again...
Ciao
Posted by Dominic at 11:14 No comments:

Windows Terminal Is The Best

Only been using Windows Terminal for 10 minutes and already it's clearly the best! I heard it from Kayla Cinnamon on RunAsRadio Podcast and right away installed it from the MS Store.

RunAs Radio Windows Linux Subsystem with Tara Raj and Sarah Cooley also put me onto WSL which I now always advocate rather than running a VM (unless you really need one) or Cygwin (nobody needs Cygwin). The slick thing with Terminal was that it dynamically added a profile for WSL after I installed it!

Between these couple utilities, WSL and Terminal, many of us can shed all our Linux stuff; virtual machines, Cygwin, Putty, Term, WinSCP, etc. And be better for it.

You change your Language.

I did this in Outlook Web Access and the one thing it will have to do is rename your "Archive" folder (archive-old or whatever) before changing the language settings.

That's a pretty well buried solution, even by Microsoft standards, and frankly I doubt anyone will ever see this post because if you search Online for "Outlook Archive change folder" or whatever, you'll get plenty of hits for the old Outlook so not really an easy way to look up this solution. But maybe, just maybe, this post will find a way to someone

Outlook has this "Archive" button - it's in Outlook, Outlook Web Access, Outlook mobile app, and it only does one thing - it puts the selected email message(s) into a folder called "Archive". It's a very quick way to file email because you also have short-cuts for it - the Backspace key in Outlook or a swipe gesture on mobile. 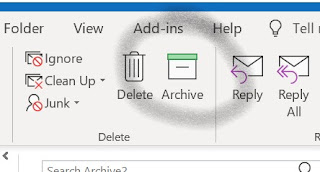 But what it used to do was used in an earlier version was ever so slightly different in that you could pick a folder for it - a folder with any name. After my Outlook was upgraded, it was still working and sending email to my custom named "All Mail" folder but my mobile started sending messages to the "Archive" folder, and Microsoft removed the option to pick what folder you used from Outlook. I haven't been able to figure this out for a long time which is why I'm posting this at all...

So yeah, that's the fix. Change your Outlook from English to French which renames all the stock system folders, Inbox, Sent, etc... and the Archive folder. Then move all your messages from "archive-old" or whatever you used and move them into Archive.